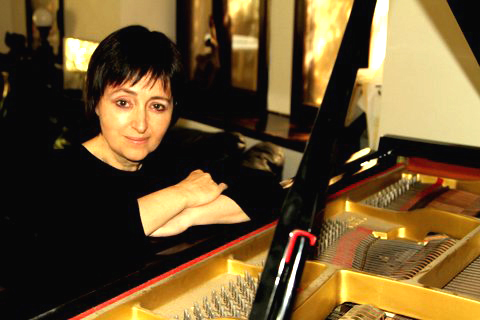 Marietta was born in Istanbul, Turkey.

She began play piano when she was 4 years old in her hometown, and three years later at the local conservatory.
Her exceptional talent soon was visible and she won one of the most important scholarship to study abroad.
Marietta studied with renowned teachers including Prof. W.I Ong and Vladimir Horbowsky at Music Academy in Stuttgart. Marietta participated in master classes, studied at courses passed by the leading artists including Gyorgy Sebok, Lev Wlasenko, Leygraaf and others and completed her musical education.
Marietta performed in many recitals in Europe, such as Germany, Austria, England, Hungary, Spain, Switzerland and France, and also participated in radio station and television productions (ZDF) in Germany. She took a part in international festivals and gave master classes in Denmark, Turkey and Spain and,
Marietta immigrated to Israel and won first place in the competition of the Ministry of Immigrant Absorption as excellent newcomer pianist in December 2012.
Among all the varied musical activities Marietta Gormezano is also a piano teacher for all levels, and master classes.